Lasix is ​​the trade name of a drug based on furosemide, a powerful diuretic that facilitates the elimination of water and salts from the body (in particular chlorine, potassium and sodium), increasing the production of urine by the kidney. Physicians use Lasix to eliminate fluid accumulations in tissues (edema), to treat hypertension and to solve some serious cardiac and renal problems.

What Lasix is used for?

Lasix is indicated in all forms of cardiac edema edema, inadequate control of edema (of renal and non-renal origin), of refractory edema to corticosteroids, of hypertension of light and medium degree. Lasix in solution for infusion and in 500mg tablets, is indicated only in cases of acute or chronic renal failure, and in case of nephrotic syndrome (chronic glomerulonephritis, lupus erythematosus) with impaired renal function. 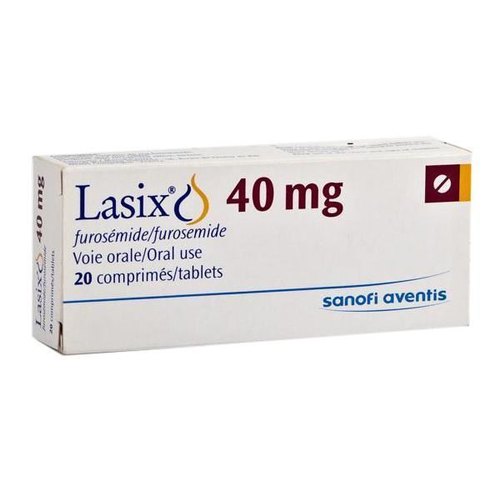 Lasix is absorbed very rapidly from the gastro-intestinal tract, maintaining a high bioavailability, which is between 50% and 70%. In the blood stream, furosemide (active ingredient of Lasix is strongly bound to albumin and other plasma proteins, and subsequently excreted mainly through urine.) The rapid diuretic action of Lasix is due to the biological effect of furosemide, a molecule in degree of action at the level of the ascending stretch of the loop of Henle and of the distal tubule (portions of the nephron – functional unit of the kidney appointed to the filtration / reabsorption phenomenon) inhibiting the reabsorption, mainly of chlorine and sodium, and further reducing the reabsorption of water at the proximal renal tubule.

Before starting the Lasix medication during therapy, it is necessary to check for the presence of urinary tract, levels of potassium, sodium, creatininemia, glycemia, glycosuria, acid-base balance. More attentive monitoring, and strictly supervised by medical personnel, are required in the treatment of patients with hypotension, diabetes mellitus, gout, hepatoneural syndrome, hepatopathies, nephrotic syndrome etc.

Although therapy with Lasix has been associated with hypokalemia only in very rare cases, before and during the treatment it would be necessary to add to the diet foods rich in potassium, such as potatoes, bananas, oranges, tomatoes and spinach. The potential and unpredictable hypotensive action of Lasix could compromise the patient’s perceptive and reactive abilities, and adversely affect the ability to use vehicles and machinery.

Lasix should not be administered throughout the pregnancy. The active ingredient of Lasix can easily pass into breast milk and inhibit lactation, as well as creating damage to the newborn; therefore breast-feeding should be discontinued during furosemide therapy.

The state of gastric filling and the concomitant administration of food can reduce the absorption profile of Lasix by altering its normal functionality; therefore it is advisable to take this medicine on an empty stomach.

Undesirable effects associated with the administration of Lasix can also occur at therapeutic doses and include: Increased urinary excretion of electrolytes, resulting in increased thirst, headache, confusional state, muscle cramps, tetany, myasthenia, changes in heart rhythm and gastro-intestinal disorders. These conditions are closely associated with the concomitant presence of various diseases and unbalanced diet.

Dehydration, more frequent in elderly patients, with possible thrombosis linked to hemoconcentration and consequent increase in serum levels of creatinine, uric acid, triglycerides and cholesterol. Reduced glucose tolerance, with potential worsening of glycemic control in patients with diabetes mellitus. Hypotension resulting in confusion, headache, dizziness, drowsiness, visual disturbances, weakness, dry mouth and difficulty maintaining the upright position. Skin reactions, rash, erythema, dermatitis and shock (very rare), in case of hypersensitivity to the drug or to one of its components. In case of overdose , the onset of the aforementioned side effects is more probable and decidedly faster.

Lasix can only be sold under medical prescription. The use of Lasix should always take place after consulting your doctor. The indiscriminate use of Lasix, among athletes and not, for the search for the loss of a few pounds, exposes the body to serious side effects. Moreover, it is always opportune to reiterate that weight loss is dictated by the elimination of fluids and salts and not by a real weight loss effect, intended as a loss of fat mass.